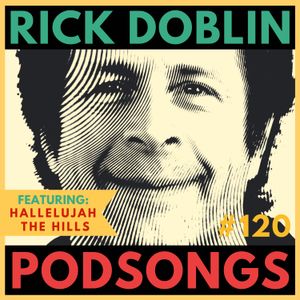 In this episode of Podsongs, Ryan Walsh of the critically acclaimed Boston-band 'Hallelujah The Hills', interviews ground-breaking researcher Rick Doblin, founder of the Multidisciplinary Association for Psychedelic Studies (MAPS). The interview that the song inspires is song called 'Get Free'.

Rick Doblin, Ph.D., is the founder and executive director of the Multidisciplinary Association for Psychedelic Studies (MAPS). He received his doctorate in Public Policy from Harvard’s Kennedy School of Government, where he wrote his dissertation on the regulation of the medical uses of psychedelics and marijuana and his Master’s thesis on a survey of oncologists about smoked marijuana vs. the oral THC pill in nausea control for cancer patients.  https://maps.org/

Hallelujah The Hills have been releasing critically acclaimed albums and touring the U.S. since 2007. Described by Spin as “criminally underappreciated” and lauded by Pitchfork for their “fist pumping anthems,” they’ve been declared “Boston legends” in their hometown and as having a “cult following” by Stereogum. The band released their first two albums on Misra Records, assisted Titus Andronicus in recording their breakout album The Monitor, and are one of the only bands to have ever toured with The Silver Jews. Their sound was creatively explained as “the kind of punk rock you’d expect on stage at the roadhouse from ‘Twin Peaks’” in The Boston Herald. Others go further, with Aquarium Drunkard noting “few do it with the style and imagination of Hallelujah the Hills” and Captain’s Dead boldly publishing that they “without a doubt they are one of the greatest bands currently making music.” https://www.hallelujahthehills.com/

LYRICS: We’ve been backstabbed betrayed, butchered and splayed On the altar of “the way it’s always been done.” It’s American, man, watch the funerals span The bulk of the calendar year  And you can shake your head say it’s not right Spend all your nights in electronic fights But you know in the end, there’s no way to defend The way we do nothing at all  When waking up is a trauma and hellos turns to drama You disassociate from every nuclear thought Total lack of conviction with a bullshit addiction It’s enough to forget all we’ve got  And all we’ve got could someday be enough A spiritual world where we lean into love Well hey I get it man, you’re not sure of the plan As you harangue me holding a beer  What if the best in us was on the cusp Of true manifestation? Could we take the leap into the deep And find that the softest landing?  And besides   What have we got to lose? If we could stay like this or get better, What would you choose?  I just want my friends to get free I just want my love to get free I just want the pained to get free I just want you to get free I just wanna get free   Come on let’s all get free