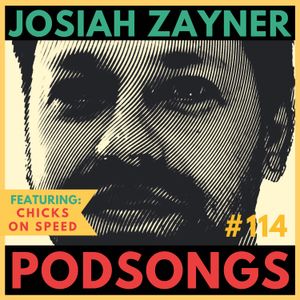 Jo Zayner is a biohacker, artist, and scientist best known for their self-experimentation and work making hands-on genetic engineering accessible to a lay audience, including CRISPR. josiahzayner.com/

Chicks on Speed is a feminist music and fine art ensemble, formed in Munich in 1997, when members Australian Alex Murray-Leslie and American Melissa Logan met at the Munich Academy of Fine Arts. http://www.chicksonspeed.com/

Podsongs is a podcast where musicians interview inspirational people as inspiration for a new song. www.podsongs.com

Where’s the bass? Doing the science
Cut and add, you’ve got the sequence
Making it happen
Do you want to jam, with my genes?

Bottom up, top down
Lifloning logistics
Baby genes in editing
Change our genes, make a choice
Self-injected, what’s the real
Believe in who, what’s the wrong in the world

Me and you just we two point of view
What’s the truth?

If only, science made me cooler
Maybe some talent and a photogenic bone structure
Dear science, save me from this gene pool
It’s mediocre why does nature have to be so cruel?