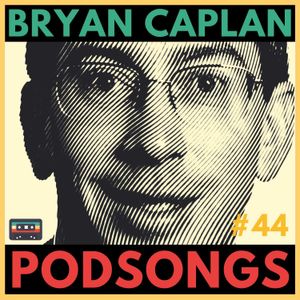 Bryan Caplan is an American behavioral economist and author. Caplan is a professor of economics at George Mason University, a research fellow at the Mercatus Center, an adjunct scholar at the Cato Institute, and a former contributor to the Freakonomics blog; he also publishes his own blog, EconLog. He is a self-described " economic libertarian". The bulk of Caplan's academic work is in behavioral economics and public economics, especially public choice theory.

Immigrants only take, and they will break, the welfare state
For these purposes
make access to services
purchases
so this encourages nurturers
for surpluses

VERSE
They don’t talk like us, they can't discuss, they can't adjust
To address this request I suggest a language test which selects the best that possess the necessary linguistic finesse

They've got bad ideas, they'll bring them here, these are our fears
Protect from the threat from the outset by vets for citizenship with a net to catch the criminal mindset

BRIDGE
Restriction of movement has given us global apartheid

BRIDGE
They say stop immigration, cos they don’t understand causation

VERSE
Immigrants they bring crime, all the time, just by design
The data doesn’t back this up but check criminal records

They don’t know our culture, or our structure, they are vulgar
Stipulate local knowledge, and a  cultural exam

CHORUS
For many financial and social problems they say restrict immigration
They throw away the benefits cos they don’t understand causation
When your only tools a hammer, everything looks a nail

BRIDGE (Spoken)
These solutions may sound difficult, but they're already in action
Welfare to Work & delayed citizenship have already gained traction
What about Blue cards as well as Green?