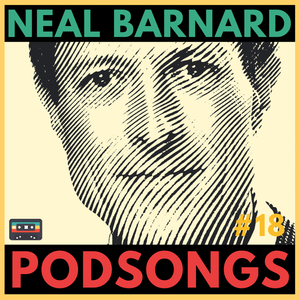 Neal D. Barnard is an American author, clinical researcher, and founding president of the Physicians Committee for Responsible Medicine (PCRM). Barnard founded Physicians Committee for Responsible Medicine (PCRM) in 1985 because he "wanted to promote preventive medicine." By 2016, the Washington D.C.-based PCRM had 150,000 members, including 12,000 physicians and reported revenues of more than $20 million. He appeared in the 2011 documentary feature film Forks Over Knives.

Barnard serves as an Adjunct Associate Professor of Medicine at the George Washington University School of Medicine. He founded the Barnard Medical Center in 2015 as part of PCRM, and it opened in 2016 with him as president; the center provides primary care and emphasizes diet and preventive medicine.

VERSE
Fm
Could you shoot a cow?
Cm
Stab a goat?
Bfm
Hold a little sheep
Fm
And slit its throat

Would you feed a pig a diet that includes
Euthanised pets
Which have been dried and ground and sold as
"Protein concentrates"?

Then slaughter it
And eat its guts
Then grind up whatever's left
for growing piglets?

VERSE
Could you inseminate a cow?
In a very very painful way
Then 9 months later come back and
Take its baby away