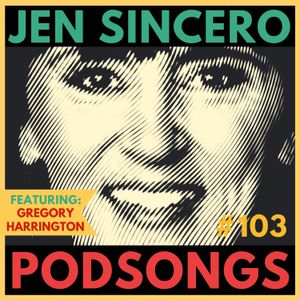 This episode of Podsongs—where inspirational people inspire a song—is Jen Sincero, a #1 New York Times bestselling author, speaker and motivational cattle prod who’s helped countless people transform their personal and professional lives via her products, speaking engagements, newsletters, seminars and books. Her #1 New York Times bestseller, You Are a Badass®: How to Stop Doubting Your Greatness and Start Living an Awesome Life (2013), has been on the NY Times bestseller list for over four and a half years, has sold over 5 million copies worldwide, is available in over 40 languages, and continues to grow in popularity around the globe. Her follow-ups, You Are a Badass® at Making Money: Master the Mindset of Wealth (2017), also a NY Times bestseller, You Are a Badass® Every Day (2018), and Badass Habits (2020) are written with the same signature sass, down-to-earth humor and blunt practicality that made You Are a Badass® a beloved bestseller and Jen a celebrated voice in the world of self development. https://jensincero.com/

MUSICAL GUEST: Gregory Harrington is one of Ireland’s most recognized violinists, with a wide ranging diversity that encompasses classical to jazz to crossover.

Born in Dublin and based in New York City, violinist Gregory Harrington is redefining the classical virtuoso for the 21st century. As a classical artist, he is admired for the expressive lyricism of his playing, beauty of tone, and impeccable musicianship. His unique ability to transform movie and film scores, popular jazz, rock and pop music into brand new violin concert pieces has enthralled audiences around the world. As noted by critics, Mr. Harrington juxtaposes Bach and Bob Dylan, Beethoven and Leonard Cohen, Radiohead and Johnny Cash to staggering effect. As a performer/arranger with orchestra or his performing groups, Harrington’s cross-cultural and wide-reaching appeal has brought him to perform for Presidents and Vice Presidents, celebrities, heads of state, the United Nations and millions of music fans around the globe. https://gregoryharrington.com/