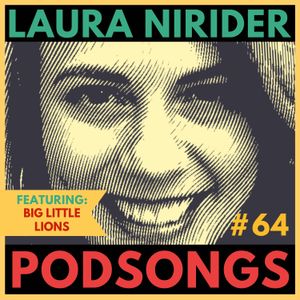 Laura Nirider is a lawyer and the co-director of the Center on Wrongful Convictions of Youth. Nirider represents individuals who were wrongfully convicted of crimes when they were children or teenagers and specialises in areas such as confessions and police interrogations.

On her CV, Nirider says: "My responsibilities include representing wrongfully convicted youth, co-teaching a clinical course on wrongful convictions of youth, and directing the Center’s mission and work. "Both my courtroom work and classroom work focus on police interrogations and confessions.

"I maintain an ongoing caseload of post-conviction cases involving individuals who were convicted as children or adolescents. The majority of my clients’ cases involve confessions."

FEATURED MUSICAL GUESTS: Big Little Lions are the award winning band from Cincinnati, OH and British Columbia, Canada. They were born out of a collaboration that won them a JUNO Award in 2014. Since then they have been cranking out infectious folk pop songs that are jam-packed with emotion and tight harmonies that sound like the product of two people working side-by-side instead of living in different countries.   They have released 5 albums to date, which have garnered them awards and nominations including the CFMA Ensemble of the Year. Their critically acclaimed music has appeared on the CBC’s Top 20 and featured on shows like q and Vinyl Cafe. The duo consists of Paul Otten and Helen Austin, both hugely prolific songwriters - their music has been placed in hundreds of movie trailers, ads, network TV shows and on MTV.

Their live show is quite the spectacle with Paul playing drums, bass and keyboard all while singing lead vocals. Helen, who is no slacker either, sings, plays guitar and foot percussion. They use every limb, and then some, to make two people sound like a full band.

Their music has been dubbed ‘a blissful marriage of new folk and sophisticated pop’, and is packed with emotion and tight harmonies. https://www.biglittlelions.com/

YOU KNOW THEY LIE

Don't say a word
You know they lie
Their power is earned
And so we fight
No alibi so they say what they like
Confuse, distort and deceive
See it's the law using their last straw
Tell me who they gonna believe

We hope and we pray