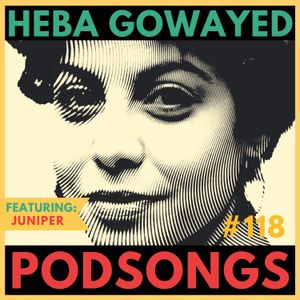 What happens when a young Boston musician interviews a Professor of Sociology at Boston University about the refugee crisis happening worldwide? The answer is a great song for Social Change.

Heba Gowayed is the Moorman-Simon Assistant Professor of Sociology at Boston University, and it's her job to make sense of it all. Her research, which is global and comparative, examines how low-income people traverse social services, immigration laws, and their associated bureaucracies, while grappling with gender and racial inequalities.

Heba’s writing has appeared in Gender & Society, Ethnic & Racial Studies, Sociological Forum and in public outlets including Slate and Teen Vogue. Her new book, Refuge, out now with Princeton University Press, explores how states shape the potential of people pursuing refuge within their borders. She is currently working on her second book, The Cost of Borders, which theorizes borders as a costly, and often deadly, transaction.

After meeting in college, Scott Johnson, Ahren Shreeve, and Alejandro Marín formed Juniper. The group has formed their unique sound from diverse influences of alternative rock, folk, R&B, and bedroom pop. With various vocalists throughout their early discography, one thing has remained constant: their songwriting is tangibly honest, ranging from upbeat and high energy to delicate and introspective. With roots in local venues and basement gigs, their music found a loyal fan base early on, which has since only grown. At just 21 years old, the band has emerged as one of the new faces of the Boston music scene, and with this encouragement, they’ve consolidated and are now working on their debut album, coming soon.

Ordinary people
Are intertwined
On the borderline

Even if you’re from the same place
Disproportionate, longevity
Based on things you wouldn’t believe…

Protected by
Countries with money
And no sense of pain

The pain, of dropping everything
And moving away
At the borderline Hope is used

And no sense of pain
The pain, of dropping everything
And moving away